Shortly after I moved to New Hampshire I discovered a great deal from the state forestry service. Fifteen Christmas trees for only $20! Of course, they were only a foot tall and had to be planted, but still. Not all of them survived, but after a few years I still had ten trees.

Dave and I started cutting about twelve years ago. At first we cut a whole little tree. Great fun, and so easy to tote it in our garden cart instead of hoisting it to the car roof. But here's the thing. Trees continue to grow. By the time the third or fourth Christmas rolled around, we were looking at big trees. Great big bushy tall trees. So we started topping them.  The trees quickly filled in the empty spaces where their tops had been.


By this year, all our trees had been cut or topped. Last weekend we ventured to the upper forty, where I planted those saplings long ago. The trees look great, but each top now consists of three or four stems. "Well," I suggested, "maybe we can cut just one stem and put it against the wall."

Dave was skeptical, but he's used to going along with my harebrained ideas. We chose one stem, full and green on one side, nearly flat on the other, and applied the saw to it. It put up a fight, being high up and very close to other upright stems, but we persevered and succeeded. It tumbled through the lower branches I was holding aside and landed butter-side-down. Which made for an interesting haul to the garden cart, because it kept wanting to roll in our hands.

It was much too tall and it had a pronounced curve. It rolled onto its belly every time we let go of it. We trimmed it to size and applied the tree stand. The tree refused to accept its fate, instead bending one of the prongs meant to steady it. Dave got out more tools, fixed the prong, and tried again. The tree allowed itself to be supported, and we set it against the wall.

It leaned to the left, it leaned forward, and the "flat" part was more like 150 degrees than 180. Many of the branches were vertical.We tinkered with the leans for an hour or so, rotated it for the best view and hoped the verticals would relax in the warmth. I apologized for my suggestion. Dave conceded that from the proper angle, it looked very nice. And he discovered that the extra 30 degrees of emptiness, where it didn't touch the wall, made it very easy for us to water the tree.

Not the best-looking tree we've ever had. But once it recognized its place of honor, it graciously allowed us to decorate it. It released its heavenly aroma and sipped politely at the water in the stand. Its oddities give it more character than the manicured ones in the lots. And it looks pretty darn good with lights and ornaments and tinsel. 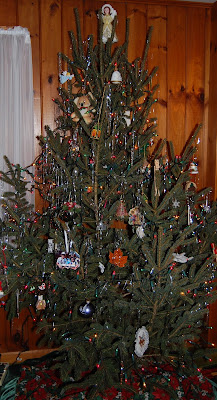 And the good news is, we have lots more branches.