Today I welcome author Karen Ann, to discuss her new release from Martin Sisters Press, Of Blood and Lions. Full disclosure: I had the privilege of working with Karen on the first edit of this wonderfully realized fantasy.
Take it away, Karen!

What is Of Blood and Lions about? 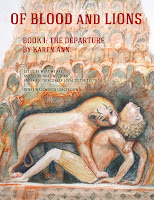 Of Blood and Lions is the story of Katherine Chambers, who becomes involved in an ancient sibling rivalry between nearly-immortal Assyrian warriors. While hiking near her small hometown in Massachusetts, she is injured in a skirmish between a demon of the enemy and the lion-human hybrids who possess supernatural powers.The only way to save her life is the elixir from the lion Issy, mentor to the hybrids. The only way to administer the elixir is through the lion’s bite. During the following year, Katherine and her husband wrestle with the changes that Katherine goes through as she transforms into one of the lion-hybrids. Throughout the story Katherine desperately struggles to hold on to her human life while dealing with her new abilities. Katherine and her human family become victims of Reggie, the sick and twisted brother of the hybrids, who is determined to get revenge on Issy whom he blames for losing his kingdom two thousand years earlier. Of Blood and Lions is the story of love lost and found and the heart-wrenching tale of one woman coming to terms with the important matters in life.
Every story has a beginning, usually in some unexpected place. How did this project get started?

It all began in 2008 on a visit to the Museum of Fine Arts in Boston to see the “Art and Assyria” exhibit. While at the exhibit I came across an ancient carving titled “The Lioness and the African.” The ancient carving captivated my attention and my heart. I loved the sensual way in which the lioness held the man with her paws as if to kiss rather than kill him. I purchased a postcard size picture of the carving and for the next two years the story of the lion and the man took shape in my head.

Despite all the books purporting to teach "how to write," every writer does it differently. What is your writing process? How do you find time? Are you a pantser or an outliner?

I’m a scientist by trade and my work requires that I write many technical reports. By nature scientific reports are very structured and always begin with an outline thus it might be surprising to learn that my fiction writing style is somewhat chaotic.  I realized early on in my writing Of Blood and Lions that I didn’t have to be as rigid and deliberate as I am at work. I can let my mind and my writing wander in several directions until the correct course becomes clear. Book One began with the beginning and the end. I filled in the middle as I went along. Even though I don’t work every day on my manuscript, I am always writing in the back of my mind. I imagine that this is probably the case with most writers. I have a notebook in the car, at work, and in my purse to write down ideas as they come to me.
I think every writer lives in fear of losing ideas, so we stash notebooks and recorders everywhere. I keep a lighted pen and pad on my nightstand.  Tell about your writing background. Have you written other stories in the past?

This is my first fiction novel. I have worked in the medical device industry for 35 years and have authored and co-authored several papers during my tenure.

There is something magical about that first story. Like a first child, it remains special forever. What was it like to get published?

Getting published has been the most interesting and fun project ever! When I first began writing my story it was difficult to look far ahead and to imagine even seeing my book in a book store. I still smile every time I think back to the day the e-mail came from Martin Sisters Publishing telling me they were interested in my novel. I had to read the e-mail ten times before the reality of what they were telling me set in.  In the process I have met many other writers and made many new friends. I’m an introvert and don’t spend much time socializing, so this experience has really helped to pull me out of my shell.
The main character Of Blood and Lions scowls constantly at the idea of fate directing her course, but for me it is something I see in my life all the time. For instance, the day I happened to meet you, Nikki, at the Townsend Fair and hired you as my editor. It was your help and encouragement that gave me the push to get my novel published.
It was a pleasure, and I'm so happy to see you taking off on this new adventure. What is the Big Cat Project? How did you get involved in that?

National Geographic’s Big Cats Initiative is a comprehensive program that supports on-the-ground conservation projects, education, and economic incentive efforts and a global public-awareness campaign.  The first step in the program is to halt the decline of lions and cheetahs that are dying off rapidly across Africa. These cats once ranged across the African continent and into Syria, Israel, Iraq, Pakistan, Iran, and even northwest India. Two thousand years ago more than a million lions roamed the Earth. Since the 1940s, the numbers of lions and cheetahs has dropped from an estimated 400,000 to as few as 20,000 animals. Scientists connect the drastic decreases in many cases to burgeoning human populations. The Big Cats Initiative aims to halt lion population declines by the year 2015 and to restore populations to sustainable levels.
Many people don’t realize that when one species disappears it affects the balance of many other species and can even put human populations in jeopardy. One of the main inspirations for me in writing this book was to raise awareness not only for the big cats but for conservation in general. For every book sold, $5 will be donated to National Geographic Big Cats Initiative.
That is a very generous donation, Karen. Obviously,  you care deeply about the planet we live on.   I hope you get a terrific response to help these beautiful animals. What else inspires you?

I am inspired by the people around me in addition to the movies I watch, the books  I read and even the music that I enjoy listening to, especially country music. The songs always tell a story and somehow speak to my heart.
Lions, ancient Assyria, mythology--where did your research for this project take you?

My research for this book took me all over the world. At first it began with books on the Assyrians and then on to books about lions. There was a tremendous amount of investigation into world history when I was creating the different lion-hybrids. I went back and forth trying to decide which ages and wars the other hybrids would come from. It’s been a great refresher course! I also am very fortunate to work in a very diverse company and have several friends who consider themselves to be of Assyrian decent. These friends helped me tremendously in understanding the Assyrian language and history.
One other fun activity that I did for my research was to take a fencing class. Even though the fencing lesson in the book only takes up two paragraphs, I didn’t feel comfortable writing about an activity that I wasn’t familiar with. The racing scenes also were written from my experience while on trips with my husband to Lime Rock Race Track in Connecticut.
I spent a day as a movie extra for an as-yet-unfinished mystery, and I'm a huge auto racing fan. What’s next to come out of your notebooks? New stories in the same universe, or others?

I’m in the process of writing Book 2: Family Matters. Without giving away too much of the story, it will center on the Katherine’s new hybrid family and the parts of her human family that she still has with her. The antagonist in the first book, Reggie, will be causing even more problems for his siblings and the other hybrids. Melissa the witch, who played a small role in Book One will have a chapter devoted to her life and history.  I am also planning to delve deep into Reggie’s psyche when he was growing up in Assyria under his father’s strict rule in order to flesh out why he is as full of revenge as he is. Many people who have read Book One are also interested in how Issy the lion came to be in her present form. I am devoting a chapter to her transformation back in 3200 BC.
Having read Book One, I know Katherine has some challenges ahead of her, which I'm sure you'll handle with your deft touch. Who are your favorite authors?

The list is long but the top five are Steven King, Ray Bradbury, Edgar Allen Poe, J.R.R. Tolkien and George R.R. Martin. I am obsessed with Games of Thrones lately and am on my second reading. I have a serious problem, I know!
Tolkien and Bradbury are right up there on my list, too. Just for fun, tell us one unusual tidbit about yourself.

I like to pet bumble bees. On cool spring and fall mornings the bumble bees that didn’t make it home in time can be found still clinging to the flower or leaf they last visited when the sun went down.  If you’re careful you can touch their fussy backs and spend time identifying the different species.
What fun! I like to pet dragonflies in the same circumstances.
Karen, thank you so much for stopping by today. Best of luck with your book. Readers, to purchase your copy in print or eformat, click here. To visit Karen's website, click here.
Posted by Nikki at 7:00 AM 4 comments: