RIVER BENDS
You never know which way the river will go. You just slip into the water and hang on for the ride.
For example, I went on a tree hunt last week. Since I live in the most heavily forested state in the union, you wouldn’t think this would be such a big deal. Heck, I don’t think I’ve been anywhere in New Hampshire where I couldn't see a tree. But I wasn’t just looking for any old tree. I was in search of a big tree. Specifically, a big hemlock.


Anne Krentz, of the New Hampshire Big Tree Project, had emailed me and explained that the previous hemlock champion in my county was dying. She’d heard there were some big hemlocks in Sheldrick Forest, a property of The Nature Conservancy; did I, as a volunteer steward in the Forest, know of any?


I confess that I’d never sought out big trees of any species. Sheldrick Forest hosts a magnificent yellow birch “candelabra” tree, a huge thing with six mossy stems. It’s one of my favorite trees ever, but because it is really a clump of trees grown together, it doesn’t qualify for the Big Tree designation. But, I told Anne, there certainly are some big hemlocks in the Valley of the Giants in Sheldrick. Sure, I’d help her look for a new champ.


Anne  and another tree expert and I tramped around the Forest and measured a bunch of trees. The biggest hemlock we found measured eight feet in girth and 130 in height. As an afterthought, Anne had us look for a big red maple. We found one of those, too, seven feet around and 125 high. Two champion trees in one day—what could be better?

While Anne was finishing up her notes, I shuffled along the trail and came across some rather stunning white berries. They stood about two feet above the ground, on an attractive plant with astilbe-like leaves. I found another plant of the same type a few feet away. I’d never seen this species, so I took a picture and identified it from a description and sketch in a Peterson guide.


Some people call it doll’s eyes, because of the black dot on the end of the white berries. But it’s more ominously known as white baneberry. Checking my guide to edible wild plants, I discovered that any part of white baneberry, if eaten, causes severe dizziness and vomiting. Darn, and I was going to see if I could grow some in my garden.


I let Anne know about my identification. Next thing I knew, I got an email from a woman who is writing a book about poisonous plants. Could I guide her and her photographer husband to the baneberry? I never object to a visit to Sheldrick, so the following day we braved the tail end of a rain shower. Tara and Mark Johnson were fascinating people to know, and they got some terrific photos of the white baneberry, like the one above. And of the poison ivy rash on my ankle. No, I’m not sharing that picture.


From big trees to poisonous plants to meeting four fascinating people.  You really never know which way the river will take you. But if you're open to the possibilities and willing to go down a few dead ends, you’re bound to end up someplace interesting.
Posted by Nikki at 9:23 AM No comments:

Today I’m pleased to host Holly Hunt, author of The Devil’s Wife and Scale and Feather from Champagne Books. Holly is a delightful personal with a devious and subversive mind. Her books are great reads. Welcome, Holly!


Tell us about Scale and Feather. How did it come about?


Scale and Feather was a book that's gone through about 7 different drafts, and ended up being the combination of 2 different stories. I love reading dragon books, and wanted to try my hand at it. Somehow, though, it ended up being a bit fairytale, with a princess, a rescue and a civil war. But, hey, what can you do?


I love genre mash-ups, especially when they work as well as yours. What/who influenced or inspired your writing?


Generally, my books come out of reading something, and not liking where it ends. So I reconstruct it, put my ending in, then go back and make it my own. It's the simplest way to do it. The Devil's Wife was my take on the end of Lucifer's fall. Blood Moon my take on all the soppy werewolf stories going around. Scale and Feather is just me goofing around with a book I did like, and it slowly evolving into its own world.


I haven’t gotten to Blood Moon yet. I’m looking forward to it. Do you have a regular writing routine? I know you have a busy schedule with your job and school; how do you fit writing in?


Regular writing routine? What's that? I write as much as I can Mon + Tues (my days off), and research every odd evening after work. And when that's done, I get to work on my school stuff. Sometimes I write a lot, sometimes I find myself spending 4 hours on Facebook instead of doing what I should have.


Ah, social media. The great time drain.  What do you like best about writing? The least?


The best bit? Finishing a story. The worst? Finishing a story. Finishing a story, you're ending everything you've done. You've spent years (or weeks) writing this thing, and all the characters are there, and you don't have anything to o with them anymore. I always feel like I'm losing family when I finish a story. And I can't usually bring myself to start a new one. Who needs the pressure of sticking to the rules you've already created?


Finishing a book is like empty nest syndrome. You’ve done your best with these characters and now it’s time to turn them loose in the world. It’s a bittersweet moment. Tell us about your favorite non-writing activities.


Wait, there's something other than writing? Well, I watch a lot of cartoons (Batman, Spiderman, Young Justice, the newer stuff), movies (Batman, Spiderman, Avengers, Prometheus, all that) and looooove wandering through the pages of history. Working on a time-travel, fossil-filled book at the moment. But I don't want to say any more, or I'll jinx myself!


Any advice for newbies?


I'll pass on the best advice I ever got - "You can't edit a blank page." Also, once you have that contract, promote your butt off.


Holly, it’s been a pleasure having you here today. The Devil’s Wife is available now from Champagne Books; Scale and Feather, also from Champagne, is due out in October. Blood Moon is available from Amazon Kindle.
Posted by Nikki at 7:00 AM 3 comments:


There are thousands of mussel species in the world, most at sea but hundreds of them living in fresh water, and at least ten in my home state of New Hampshire. (I’m told freshwater mussels are edible, but not as tasty as saltwater ones. Being too squeamish to catch and eat my own specimens, I’ll leave that judgment to others.) All mussels spend most of their time clinging to a rock or burrowed under sand or mud. They’re all filter feeders; they siphon in water and eat any organic matter they find. They don’t tolerate pollution well, so if you find mussels in your local lake or brook, you can rejoice in the purity of the water. When the season is right, they release their eggs and sperm en masse; the resulting babies drift along the currents in huge numbers until they become prey for larger animals, or after a rather complicated maturation cycle, find a nice bit of real estate, secrete a shell, and settle down for the rest of their lives. Depending on species, they grow to as little as one and half inches or as much as eleven inches. Sometimes, if the currents change and again depending on species, an individual mussel might seek out new hunting—er, siphoning grounds.


Mussels—at least the ones I’ve seen—also do another thing. They write. Don’t believe me? Check out the picture below. This guy is clearly practicing his cursive e’s in the sand, though he got a little sidetracked there at the end. Or maybe the e’s are the sidetracking until he figured out where he wanted to go and set off to get there. (Don’t ask me how I know it’s a guy; I’m using the generic masculine here, folks. The only way to sex a mussel is to dissect it, and my curiosity didn’t extend that far. Besides, I wanted to read the rest of his book.) When you consider that mussels crawl at a cracking one to two inches per hour, and that the track in the picture is about 16” end to end not counting the e’s, you can only conclude that this guy had a lot to say. 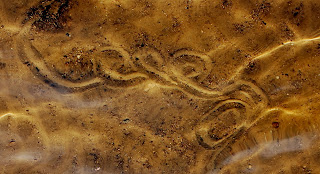 Going down to the lake early every morning while I was on vacation last week, I saw a lot of mussel writing, mostly scrawled lines, quick scribbles and enigmatic traces. The strange hieroglyphs would appear overnight and then wash away under the force of powerboat waves, so they were only visible for a short time. They were hard to photograph, given the refractive power of water, the low angle of the sun, and the constant rippling of the waves. I took about thirty shots before I got this one. When something is so fleeting and furtive, I figure it has to mean something.


So what does this mussel writing mean? Some would say it means nothing; it’s just the random wandering of a hungry mollusk. But, I ask, what about those weirdly regular e’s? Are they a sign of mussel madness? Magnetic disturbance? A message from the Ineffable? Sheer joie de vivre?


I don’t know what it means to this particular mussel, but here’s what this writer finds in it: Keep going. Keep writing. Even if you’re going around in circles, it’s okay to keep writing. Maybe if you’re going around in circles, eventually you’ll get dizzy and stagger onto the right track by accident. And who knows? Maybe the circles will give you glimpses into other tracks. After all, every curve has an infinite number of tangents to explore. At the very least, you’ll build up your writing mussels.